Fall is undoubtedly my favorite time of year and, although I am not interested in rushing the last few days of summer, I am excited that my favorite holiday is just around the corner; Halloween. Unlike many holidays, Halloween holds a mystery and excitement for children of all ages that lights a spark inside all who celebrate; or perhaps that is just the candy. In the interest of preparing to celebrate I thought I would see if we could change things up this year and add donuts. Not to worry, my good friend and loyal donut follower Bob C. has supplied just the right idea; The Halloween Donut Tree, courtesy of Calli at Make It Do, by way of Brittany at One Charming Party.

Bob and his better half host and annual pumpkin carving party each year and consequently are always on the hunt for new party ideas. What better way to add a new twist to your Halloween celebration than by combining it with Donuts?! You will need the following supplies to start:  a 24″ styrofoam cone, 12 ounce bag of semi-sweet chocolate chips, basting brush, toothpicks and of course 45-50 donuts!

For a step by step tutorial of how to make your own tree, please click on the link below and send us your pictures.

I love a good bit of news from the Huffington Post. I love it even more when it revolves around donuts. And today they have not failed. 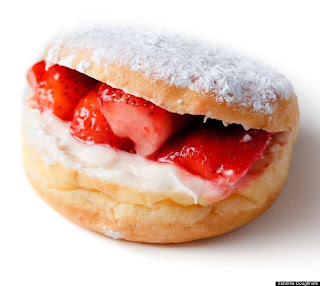 I have I mentioned that there has been an ever increasing trend recently toward more edgy, creative and innovative donut flavors; and the Huffington Post has blown the lid clean off! Whether we are looking at Atlanta based Sublime Donuts strawberry and creme, which goes full-blown-donut on strawberry shortcake, or Seattles' Top Pot Donuts going fasionista with the Chocolate Feather Boa, or back to local hot spot Kane's Donuts, of Saugus, unseating the likes of donut juggernaut Dunkin Donuts, we have independent shops crisscrossing the country with innovation and temptation to satisfy the pickiest of donut eaters.

Read up, eat up and enjoy!


Secrets Of The Best Independent Doughnut Shops In America
Posted by Donut Man at 1:30 PM 16 comments:

Let's start with my favorite: Jelly Doughnuts, courtesy of Charlie McHugh  on All Recipes.com : 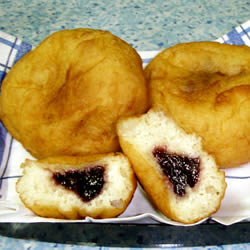 Side Effects of Donuts 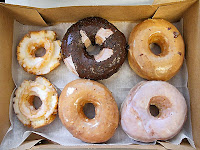 After having dinner with my good friend Sally Steinberg, author of The Donut Book, last night, we came up with an idea for today's commentary. I searched the Internet far and wide for some thoughtful insights and decided to add a twist based on my findings, the top 3 are presented below. 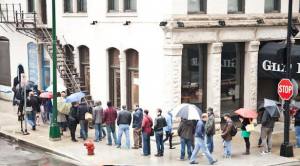 Whatever Chicago's Doughnut Vault is putting in its gourmet doughnuts appears to be having bizarre side effects: somethings causing people to line up for hours in rainy, 55-degree weather for the chance to buy a pastry from Food & Wine's #1 doughnut shop in the country. Want to know what it is? Maybe track down someone from this surprisingly serene time-lapse video of a Saturday morning doughnut frenzy along Franklin Street. Umbrella-wielding folks lined up at 8:30 a.m.—an hour before opening—and Doughnut Vault sold out in about 2.5 hours. Digital video enthusiast Mark Pallman made the video. Watch Chicagoans Buy 1,192 Doughnuts In 2.5 Hours

2) Body Building.com readers are wondering, "If I ate a DOZEN donuts for a day, would I have any side effects/fat gain? " an excerpt follows, but the discussion continues for 3 pages: 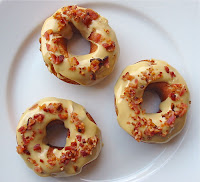 Floridaa:  "I haven't had a donut/cookie in like 2 years! I neeeed sweets! I was wondering if on a non-workout day, if I just bought a dozen glazed donuts and grabbed one whenever I was hungry would I have any negative side effects on my body? Would I gain fat? A dozen equals about 2800 cals (3300 maintenance) and I'd have nothing else besides fat free milk/water. Would the loaded fat kill me? Would it do anything at all??"
Womanoid: "Why all 12 plain glazed?"
Floridaa: "I figure it gives me the most physical matter for my calorie budget, right?"
Womanoid: " But would it even be worth it without the cream, sprinkles & jelly?"
Floridaa: " depends... if i could have like 9 or 10 badass donuts.. it would be worth it " 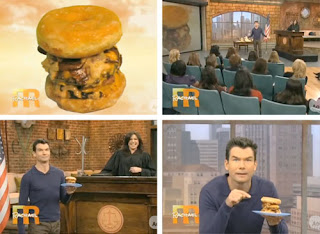 Recently on, The Rachael Ray Show, actor Jerry O'Connell defended the combination of beef, cheese, bacon, and glazed doughnuts. "If my client is charged with being delicious, then yes—he's guilty, But the last time I checked law books, mixing great taste and flavors was every American's right."  So...why did O'Connell report for "Jerry duty" (their words, not mine) in a mock trial presided over by Judge Rachael Ray? To promote his new legal comedy/drama show, The Defenders.


I know what you are thinking now and you are still wrong. Are donuts evil, no. Do donuts cause wars, well perhaps a stampede, but no. Will donuts cause boughts of random silliness, causing people to do ridiculous things that no cupcake or cookie has ever inspired - YES! So, the next time you worry about the side effects of donuts remember, donuts make smiles, smiles cause laughter, and laughter is always a good thing.  Eat up and enjoy!

How many days does it take to digest a Donut

Back from the weekend, behind a my desk, and wondering about all manner of Donut randomness...the old question occurs to me "How many days does it take to digest a donut?" I wonder not so much in the interest of weight loss, but more in the interest of bonding with my dough ball. How long will it be with me before passing to the other side? 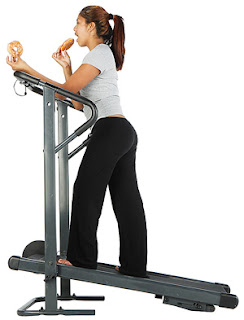 heathertharp, on Ask.com seems to think the answer is 72 hours, while the crowd at Yahoo answers seems to range from 72 hours to 72 years, if only. No matter how much research I do, the misconceptions surrounding digestion of our beloved donuts range from hours to days, to weeks. There is an almost mythical lore to the amount of time a donut stays in your system. It's a legend best saved for a camp fire or passed down from grandparents to unsuspecting grandkids being bounced upon their knees. The donut, the mighty, the dough filled ball; dare you consume, may never leave. Unless of course, you have a metabolism.

But then we must come back to reality and face the simple fact that, no matter how magical, mythical, or feared, the donut too is only food. And like any food, is comprised of sugars, and will digest. This donut too shall pass. But that means it's time for another. :)

The Best Donuts in NY

As I am always on the hunt for Donut news, and will be traveling to NY next week, I thought of no better way to end the week than to share with you the 10 Best Doughnuts in New York, courtesy of Tejal Rao, The Village Voice.

Featuring the best shops from Brooklyn, Dough, to The Donut Pub, on 14th st, this article has me drooling and longing to go explore next week.

In Search Of Donuts...San Fransico Style 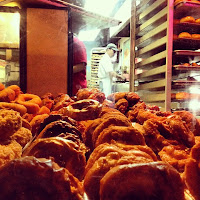 To wake up your week and toast those adventurous individuals I would like to present you with the following work from Sam Crayne, a Director, Cinematographer, Photographer, and Graphic Designer based in San Francisco, CA; celebrating the search for donuts and finding them at Bob's Donuts and Pastry Shop...

Sam manages to capture the adventure of the late night donut hunt, the hungry patrons gathering like hawks, Bob baking and frying, the activity and hum of the donut culture, nicely edited with support from Kesha's hit Tik Tok; how could you not want to get one right now?


If you're like me, and you don't live in San Fransisco, let's give thanks to Sam and enjoy by way of video. Please visit the link below.