There are rare opportunities in life where words just can't quite do justice to what a writer wants to convey. Fortunately, whenever this happens, we can lean on the old addage "A Picture is Worth a Thousand Words". And, if an average picture is worth a thousand words, then a picture of a donut...well, that's a Mastercard commercial.

With that I give you the comic genius of the team at The Dog House Diaries. (Click on the comic to enlarge) 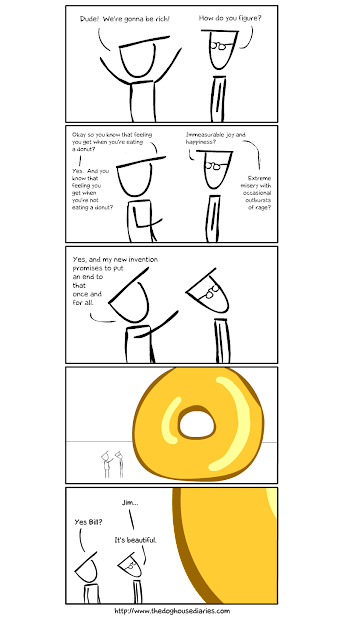 Elvis Discovered in Donut Factory...this story and more on Spoof.com

Every once in a while you might stumble across and idea or a story that makes you say, "Now why didn't I think of that?" Thankfully, the many individuals who contribute at Spoof.com, and the creators of the site, have come up with just such and idea; or several hundreds of these ideas.

The Spoof as an entity of the Blogosphere is described as, per their about section:

"...is one of the leading satire newspapers on the internet.


Providing an irreverent and satirical slant to the current big news stories throughout the world, bringing you more funny stories than you can shake sticks at. We rely entirely on our readers to submit stories to The Spoof. All the material on The Spoof is submitted online, welcoming all kinds of exciting ideas and style of writing and writers to publish their thoughts! Our editorial team (when not making coffee) work hard to give you the best response to your work."


Anyone who knows me knows I love to shake sticks at things; small animals, my grandmother, and of course funny stories. Nothing is safe. Now, all funny stick shaking aside, the best thing about the Spoof is that there is a whole section dedicated to Donuts, HUZZAH!
﻿﻿ 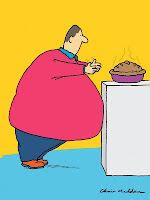 I know how much you were all begging for an image for that last headline, well too bad. Just sit back, kick up your feet, grab a donut and be glad that someone has the gusto to produce that wonderful gonzo journalism that makes you glad that the last time your were caught in a chimney trying to steal donuts you weren't naked. Or were you?
Posted by Donut Man at 10:40 AM 2 comments:

Donuts as bear bait...now hold on a minute here

One of the things that has never ceased to amaze me, while surfing around the net, is the strange things that can be found when entering a common search term in a site such as google or, in this case, craigslist.
Last night while I was taking my usual craigslist stroll, for all manner of god-knows-what, I did the same thing I usually do when looking for interesting new donut trivia. I entered the word "Donut" in the search box. I then hit enter. To my surprise one of the first headings that popped up was a listing in New Hampshire for...wait for it... Dounts as bear bait!!! And up to 400lbs at that!
Now hold on a minute here. Not that I am denying any citizen their Second Amendment rights, or their interest in hunting if they choose to partake, but 2 very obvious issues arise immediately.
1- Using donuts as bait puts the "trapper" at a ridiculously unfair advantage. Hell, I bet they don't even need to use a trap. I mean really, like anything can resist a donut. I would practically let them trap me for a donut. All they need to do is back up the van, open the door, plug the travel fan into the cigarett lighter and let the aroma do the work. Before they know it they'll have the Bear Country Jamboree in the front seat.

2- Quantity: Where in the hell does the average individual get 400lbs of donuts for strewing around the woods willy nilly in the hopes of trapping some poor little creature defensless againts its yummy goodness. I sometimes have trouble getting a half dozen from my favorite shop because they are just so tasty that the human competition beats me to the punch; never mind the woodland creatures. Of course I can picture the scene. A 1985 Dodge Tradesman van slowly backs up to the local dunkin donuts at 2am and several buldging black trash bags are passed from the backdoor through the back of the van in a heave-ho montion. Minutes later there is a subtle chirp of the tires, a bottoming of the suspension under the shear weight and an unspectacular minor explosion of sparks as the rusty tailpipe hits the uneven pavement between parking lot and street. "Why can't they fix that driveway!?" The driver thinks as he pops asprin to stem his throbbing sciatic.
I expanded my search to Google and found that this is not only a widespread phenomenon in the Northeast but throughout the US and the world.
If you are looking for bear bait to buy simply visit: Days http://daysbearbait.com/products.html
here you will find everything Donuts to Pie Filling to Brownies and Granola. Simply see the following menu:

Or you can read the latest in Donut bait violators courtesy of the Huffington Post: "Andre Ciaravola Fined For Using Donuts As Bear Bait For Hunting" " http://webcache.googleusercontent.com/search?q=cache:KpM-MeZPd5sJ:www.huffingtonpost.com/2010/05/27/andre-ciaravola-fined-for_n_592172.html+donuts+and+bear+bait&cd=3&hl=en&ct=clnk&gl=us"

Or then there is the only article that made me feel somewhat better that my beloved dough ball was being used as a trappers treat, Courtesy of the Victoria Advocate: "Bear lured from tree with doughnuts after mom shot"

http://www.victoriaadvocate.com/news/2010/jun/04/bc-us-cub-rescued/?news&nation-world
I'm of the mind to call up Tappi Bear, the famed Donut Ninja, and let his donut fighting fury rain down supreme like chocolate sprinkles on all the heads of hunters who would stoop to the depths of luring unsuspecting bears, or unsuspecting people wearing bear suits who happen to be out in a remote section of the woods, with scrumptious donuts. Where's the justice!!? 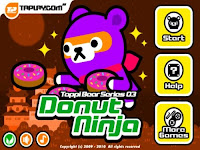