I love donuts and I love my friends. I also love that I have helped many of my friends love donuts. But of course, as we are talking about donuts, that is not a hard challenge.

Some time back I announced the launch of a new segment focusing on the adventures of one of our loyal followers and close compatriot, Tony Mento, brilliantly titled "Where's Tony with a Donut". Since we haven't heard much from him lately one could only assume that Tony was in fact "missing with a donut"... or likely several.

Therefore, when I received a text message this past week from Tony saying only this..."One word: Congdon's!" You can imagine how ecstatic I was. For, not only was Tony still alive, but he was also back on the hunt...without a vengeance it seemed. I replied - "Are you there?" as I was in Sanford Maine at the time and thought I  might be able to catch up with him for a quick jelly. But nothing. What had happened? My mind began racing thinking of all the donuts, the carnage of jelly, cream, chocolate and frosting. Tony was the Italian Stallion unleashed and hungry for any donut in his path. Like a Neanderthal on a Smith Corona, short choppy phrases where all he could manage... "Was now in Portland. BAVARIAN CREME!" Oh no, I thought. "Did Portland have any idea what was descending upon them?" Or was he lling out for help while inside a Bavarian creme? Then, there was silence. I imagine a sugary sweet coma of indulgence had caused him to lose his capacity to speak...but then came the pictures, FAST!

First it was Tonys in Portland Maine...this must have been the scene of the Bavarian creme massacre....
﻿﻿﻿

Then it was Dough Boy Donuts in Parsonfield Maine, traveling faster and faster, a freight train of sugar and sweet, no time for words just pictures, brief hints of the wake left behind. 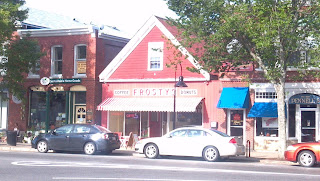 Then Frostys in Brunswick Maine, famous for its long lines and scrumptous dough balls. It was at this juncture that Tony's donut rampage must have come to a screeching halt. The long lines at Frostys coupled with the sugary-dough-like concrete working its way through Tony's system must have brought our hero down to a quivering lump, grinning from ear to ear, just outside the door behind his last victim; a chocolate frosted. 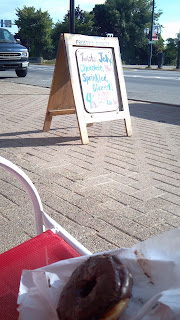 Donut Thought of the Day, Inspiration for Entreprenuers

I have a great day job, even though it has nothing to do with Donuts. Each and every day our CEO sends out an inspirational nugget called the "Thought of The Day", which I and several of my colleagues always look forward to. Toady's little nugget of wisdom was the following from none other than Charles Schwab:


“Everyone’s  got it in him, if he’ll only make up his mind and stick at it. None of us is born with a stop-valve on his powers or with a set limit to his capacities. There’s no limit possible to the expansion of each one of us.”—Charles Schwab

This is not the discount brokerage house, but rather the steel mill stake driver turned steel magnate. His quote, and fascinating rise from rags to riches, though not involved with donuts, makes me think of the many mom and pop shops we highlight on the The Donut Directory. The medium is different but the story, drive and dedication is the same. It's about individuals pushing their capacity, going beyond their limits and following a dream to makes their lives and our country better.

With that in mind, I'd like to highlight one such entrepreneur  in the Donut world; Nancy Miller, the Mini-Donut Queen of Dallas, TX.  From AGbeat and Lani Rosales,  The inspirational tale of an exploding mini-donut empire. This is the story of a stay at home mom, know more for jellies and jams than making donuts. She had no intention of starting an empire, but with a few business classes, some support from a local SCORE chapter some creativity and hard work, she is quickly becoming the Mini-Donut Queen of Dallas, TX. Nancy is a prime example of American ingenuity at its best. She proves that it doesn't take much money, but a little with the desire to work and learn anything is possible.

So take a chance on your dreams and support those who do, they might be making your next donut!
Posted by Donut Man at 12:30 PM 7 comments:

Brand new to Sanford, Maine is a wonderful little shop Dirty Dozen Donuts. The name is fun, the donuts are incredible and the young owner, Kelsey Quint, is a much needed vibrant spark to the community.

Sanford, like many New England mill towns, was once a bustling textile center that was severly impacted as companies merged and jobs left. But Sanford is a town that refuses to die, boasting a population of 21,000 and attracting entreprenuers like Quint who breathe new life through old traditions.

A native of York, Kelsey moved to Sandford in 2009, and after a sucessful prior stint at another of this Donut Hunter's loved Maine donut holes, Congdon's, she went out on her own to do what she knows best - donuts; boy does she ever.
﻿﻿﻿﻿﻿﻿﻿﻿﻿﻿﻿﻿﻿﻿
﻿ ﻿
﻿﻿﻿ Kelsey not only makes an amazing donut, she believes in building community and supporting the locals that make a community strong.
﻿﻿﻿﻿

“It was very cool to watch – money that I had saved from making dilly bars at a Dairy Queen when I was in High School – go to local tradesmen who were going to spend their money locally with people who would turn around and do the same,” she says. “When you hear on the news about the economy, it’s too large to not feel powerless. Focusing on my community and the people interact with everyday has a more powerful and rewarding effect.”

With that in mind, take a trip to Sanford to support Kelsey and her staff. One donut at a time we can strengthen our community and rebuild our economy. But just get there early or you might miss out. :)
Posted by Donut Man at 12:05 PM 10 comments:

Happy 4th of July from The Donut Directory


With the holiday quickly approaching we at The Donut Directory have decided to celebrate, the same as always, with donuts! What better way to do so than to look at some of the most delicious looking Stars and Stripes dough balls from around the country.  Remember, no matter how you do it, enjoy the donuts and celebrate safely!
﻿﻿﻿﻿﻿
﻿﻿﻿﻿﻿