Donuts and Foie Gras, a match made in Cambridge :) 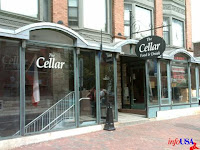 What's better than being a donut fanatic and being good friends with the woman who wrote The Donut Book, sharing Foie Gras and Donuts with her at Garden in the Cellar, Cambridge, Ma. Sally, a consummate foodie, reviewer, writer and Donut Historian, and I make it a point to get together every few months, explore a new restaurant and delve deep into conversation; yes donuts often come up.

On this particular evening, after a previous attempt at an outing had been thwarted by the Boston Green Line Train, we opted for a much easier destination, Garden in the Cellar. Located at 991, Massachusetts Ave, in Cambridge, south of Harvard Square, Garden in the Cellar is a unique, British inspired gastropub where chef Will Gilson will amaze you with a variety of culinary delights.

Having never been to a gastropub, and having no idea what they could do with a donut, I was excited to try the fare. I was not disappointed. We ordered completely off their Small Plates and Appetizer menu, allowing a variety of tastes with portions adequate enough to feel satisfied but not full enough to spoil the next dish. The potato leek soup is to die for and ample enough for 2, which we followed with bacon wrapped dates, white bean puree, and butter poached lobster. Many patrons may think the yellow vegetable underneath the dates is a type of cabbage but don't be fooled, it's apple and quite tasty. Now, Garden in the Cellar does not have a dessert menu and, as this is not a food blog per se,  we must some how incorporate donuts; we did. Let me just emphasize that, though this was my first taste of Foie Gras, all others will be judged next to it. There was a slight crust, with a mildly sweet glaze which broke through to the soft meat underneath; utterly amazing. What could possibly complete this pairing? Why a donut of course. Though not your typical "cake" donut, the consistency is more akin to that of a popover or Yorkshire pudding. It's creamy texture, with light cinnamon, sugar and salt coating, if the perfect compliment to its counterpart. Needless to say we were in donut bliss.
Desert and donuts alike come in a variety of packages, and those at Garden in the Cellar, should not be missed.
Posted by Donut Man at 10:28 AM

A strange mix foie gras and donuts, must try some time.