Are there awesome homemade donuts in New Hampshire, YOU BET!! 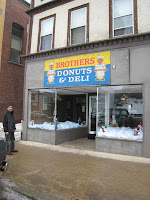 Occasionally in my donuts travels I will find myself saddened with what I find. I regularly search reviews on-line, rope in as many willing (or un-willing, though they always change their minds) participants as possible, and set off in search of the best homemade donuts. Sometimes I will find a shop converted to a large chain store, perhaps find the shelves bare and the doors locked (a sign of just how good their items are) or once in a while even find a donut which, dare I say, makes me wish I had gone to a chain. Fortunately this weekend was not such a case, though it could have easily turned out that way.

Introducing Brother's Donuts and Deli, Franklin NH. Until this past weekend the Donut Directory was a bit light on tasty fair from New Hampshire and thusly I set out to change it. I had planned a trip to visit my friend Tony, aka "The God Father" in Warner, who has accompanied me on many such donut adventures. Naturally the first thing I did prior to departing was search for donut shops in NH; the closest to my weekends destination being Dunclare's, Claremont, and Brothers of Franklin. Experience has taught me one thing when searching out small donut "hot spots", largely known only to locals; call ahead! Lack of preparation can bring you face to face with every donut hunters worst fear....NO DONUTS!!!  Therefore, we rose bright and early fueling up on a healthy breakfast of bacon and eggs and jumped on google to confirm directions and contact information. After reading a review of Brothers on-line and speaking with the very pleasant women on the other end of the phone my worst fears were confirmed, "We only have 2 jellies and 3 lemon creme left." It was 9:30am. "It's best to just call ahead as soon as you get up and we can put some aside for you." "Thank you." I said. I died a little inside and shed a small tear. But, my spirits quickly changed as I remembered plan B in Claremont. However, a call quickly confirmed a sneaking suspicion which google alluded to, Dunclare was in fact a Dunkin Donuts. I was thwarted on all fronts. I had to act fast. I quickly called back Brothers, confirmed availability of the remaining Jellies / Lemon Cremes and we were off like lightning to Franklin.

A beautiful drive in and of itself, Franklin is nestled in the southern 3rd of central New Hampshire, just West of Tilton. A former industrial center, Franklin, like many small New England towns, has felt the affects of the exportation of American manufacturing, though still retains the down home heritage which let's a shop like Brothers thrive and keep locals filling the seats. 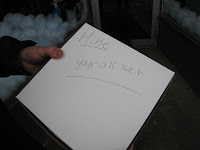 As I noted earlier one of the worst experiences a donut hunter will face is finding their destination, only to walk in and find the shelves bare; the only thing worse is to find total darkness and a locked front door. Today was just such a day. As Tony and I scoured the main street looking for the shop our eyes spotted the orange, red and blue sign, bookended by 2 bakers rolling out the dough, with one problem- total darkness. Upon looking closer the letters reading "Saturday-11:00am" confirmed our worst fear; it was 11:30. Slightly dejected and a bit perturbed at our own negligence at rising earlier, we approached the door for some photos and thoughts of returning at a later date. But wait just a minute...what greeted us at the front door was not just our own reflection in the interior of an empty donut shop but a small milk crate with a white pastry box sitting atop, the words " Mike, you are all set!" written across it; devine province. The folks at Brothers didn't know who I was, and I have not yet met them in person, but they left a small donut gift sitting out front and made 2 donut hunters days complete! This is the type of kindness that brings patrons back week after week, year after year, and keeps us all proud to come from small towns.
Let's just say that the donuts, well...they were just as great as the story leading up to them. To quote Tony... "I guess this entry just wrote itself." 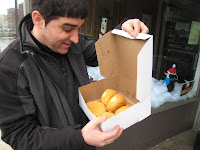 Next time you are in Franklin, make sure to add Brothers to your list of stops- just make sure to call ahead :)
Posted by Donut Man at 10:59 AM

This story has left me reaching for the nearest tissue. A beautiful turn of events indeed.

I too am a lover of donuts, and have recently hit a few pinworthy spots not marked on your Donut Map. I thought you might want to know about them.

Two friends and I, on a recent drive from DC to Florida, made sure to stop at Country Style Doughnuts (Richmond, VA) and The Donut Shoppe (Jacksonville, FL). Both lived up to their reviews and then some.

Country Style is it's own miniature house left standing alone in a somewhat abandoned-looking gravel lot. The interior is a cool pale blue color, with a counter that snakes its way around the staff area. There are also a few booths with tables. I generally find that the glazed cake donut is a tough donut to master, but Country Style makes a great one. Also, the shapes of the donuts vary in the homemade/handcrafted kind of way. Two donuts of the same kind have noticeably different shapes, which is attractive to me. They were all out of Boston Cremes at the time, but we made do with a powdered bavarian creme filled and a glazed bavarian creme filled, which were soft and fluffy, not heavy at all. A great place if you're ever in Richmond.

The Donut Shoppe shares its home with a gas station. It's in the same building as the gas station's convenient store, but inaccessible from the inside of the convenient store. It has its own door through which customer's enter from the outside, there is no seating, and only a very small space in which to form a line. When we arrived, the last person in line had his back pressed against the inside of the door. The wait was quick, maybe 2-3 minutes, too quick for us. It's pretty much a routine we can't help, we always take too long for the donut man/woman behind the counter. It's so hard to make decisions in a donut shop. Anyway, these donuts eclipsed Country Style by a bit more than a pinch I think. It could just be that it was earlier in the morning, so the donuts were fresher, but these were simply divine. My friend Max, who up until this point had proudly claimed he didn't understand the appeal of a basic glazed donut, was silenced when he took his first bite of the Donut Shoppe glazed. He'd be the first to admit it. It was still a bit warm and so so soft. Amazing. The bavarian cream filled were insane too. I'd label them as the "most explosive" cream filled donuts I've ever had. The donut just bursts open with that first bite. Potentially a bit messier than usual if you're not careful. This is a spot you shouldn't miss if ever driving through Jacksonville.

Last but not least, I have to recommend Krumpe's in Hagerstown, MD. Now, it seems I've done nowhere near as much donut shop hopping as you have, but for what it's worth, these are the best donuts I've ever had. The best glazed cake donut I've ever had. The boston creme has a delicious whipped chocolate frosting as opposed to the usual dark-colored fudge frosting that sets and kind of hardens in place. It's different and delicious. The shop is located in a back alley, fittingly named DoNut Alley. One catch though, Krumpe's hours are 7pm-2am Sunday through Friday. Closed on Saturday. I still don't really get it, but as you know, arriving at a donut shop only to find it closed is one of the worst feelings in the world. So 7pm-2am, nighttime.

I hope to make it to some of your New England recommendations while on my upcoming trip to Mass./NH/Maine. Your map will surely come in handy. Thanks.

There is a good doughnut shop in Windham NH, but I don't remember the name.

In Windham NH, there is Klemm's Bakery on 111. Amazing donuts!

I have been casting spells for many years and I have helped many people, I might be able to help you too. I am honest, and I genuinely care for all the clients who choose me to cast a spell for them.
If you have any questions about Love, Money, curse, protection, bad luck, divorce, court cases, or about me please call or email me. I really want you to feel comfortable before moving forward with any spells, or other services. I will take the time to explain things to you and provide you with honest advice, to what is best for your situation. I will not pressure you into having a spell cast, I will leave that decision up to you, and when or if you decide to move forward, I might be able to help you.
I will respect your Privacy. I will not seek to obtain any of your personal information beyond what you might voluntarily offer and all information you might give me including emails, phone numbers and photos will remain private and confidential.
I perform my Rituals only at night between the hours of 0.00 - 0.59 (South African time) lasting 1 hour but of course, this depends on the nature of the ritual, some rituals might take hours and can also become necessary to be performed at specials places like; flowing streams, cemeteries and other places dictated by the gods.
I do not want anyone to be under any illusions about my spells and its numerous rituals. Real and effective Voodoo is no child's play, it is expensive because, after the rituals, I will have to destroy all the materials involved by fire and the ashes scattered over a flowing stream or river.
You will get what you seek.But please understand this might take a lot of time and that individual results may vary. contact +27663492930, greatogudugu@gmail.com

Herbal cure for Following DISEASES,this is not scam is 100% Real.