Donut Thief: Steeling a Donut could mean life in prison

From the archives of the weird, and in the case the "Donut", The Donut Directory is proud to bring you the latest in Donut crime, supporting why we need police to actively hover at our counters, sip brown liquid and chow down!  Not that stealing a donut should carry such a stiff penalty; I mean, who could really blame you from stealing one. But, more so it's the principle behind the act; robbing some unwitting family of their Sunday joy, or perhaps the last donut of the night which some Donut Hunter has traveled far and long for.
In this particular story, from Todd C. Frankel, of the St. Louis Dispatch, 10/07/2007- a man did just that; steal a donut. The story that ensued from this simple theft though, is not one to be missed, and not one Farmington will soon forget.
I give you Donut Thief:
"FARMINGTON, MO. — Shoplifters at Country Mart tend to favor cold medicines and packaged meats. They used to steal cigarettes, too, until tobacco was moved behind the counter. But the doughnuts were never a target for thieves. 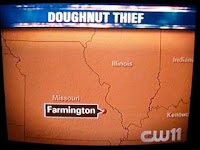 Country Mart's doughnuts — fried fresh daily in the store — sell for just 52 cents each. That is why the "shoplifters will be prosecuted" signs are displayed in aisle 4 with the pricey pain and allergy pills, and not in aisle 5 beside the glass doughnut case with its tiger tails, jelly-filleds and eclairs.
Then one man's sweet tooth got the better of him. He stole a doughnut. A single doughnut.
Authorities called it strong-arm robbery. The "doughnut man," as the suspect is now known, faces five to 15 years in prison for his crime. And Farmington, a town of 14,000 people about 70 miles south of St. Louis, has been buzzing about it ever since.
"That someone would take just a single doughnut, not something very expensive or extravagant, that's unique," supermarket assistant manager Gary Komar said, smiling.

Scott A. Masters, 41, is accused of shoplifting the pastry and pushing a store worker who tried to stop him. The worker was unhurt. But with that shove, his shoplifting turned into a strong-arm robbery. Masters, who appeared in court Friday, is stunned. The prosecutor shows no signs of backing down. In fact, because Masters has a prior record, he could get a sentence of 30 years to life.
Lanell Gibbs was there the day of the doughnut heist.
"That was a first," Gibbs, 68, said.
She has worked for 11 years as a cashier at Country Mart, a regional supermarket chain. Next to her register, she keeps a clipping from the local newspaper about the doughnut man's case. He was indicted just last month, although the theft took place in December. She likes to show the article to customers as she recounts the story.
It was about 11 a.m. on Wednesday, Dec. 6. The store was in a lull. Gibbs, who could see the doughnut case from her station, said she saw Masters slip the doughnut into the pocket of his hooded sweatshirt.
She turned to a co-worker and said, "I saw him take a doughnut. Let's see if he pays for it." 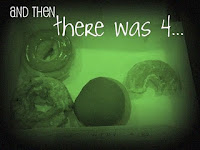 They watched Masters as he strolled past the seven green checkout lanes and out a side door between the customer service desk and the pharmacy, passing under a giant "Country Mart Thanks You" sign.
Gibbs' co-worker followed Masters into the parking lot. The co-worker, a 54-year-old woman, demanded that Masters come inside, according to the police report. He offered to give the doughnut back. She declined and grabbed his arm. That is when Masters allegedly delivered "a backhanded punch to the chest" and took off running, police said.
"That made her mad," Gibbs recalled.

The woman, who was uninjured, jumped in her car and called police as she chased Masters. He was arrested minutes later. Farmington Police Chief Rick Baker said the two incidents taken separately equaled two misdemeanors: shoplifting and minor third-degree assault. Together, they make for second-degree robbery, a class B felony, defined in state law as forcibly stealing property. The amount of force and the amount of property does not matter. 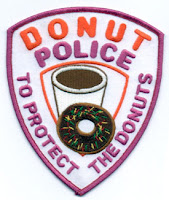 "It's not the doughnut," Baker said. "It's the assault."
Masters is a small man, wiry, about 5-foot-6, with short-cropped hair, a graying goatee and hound-dog eyes. He is a "frequent flier" at the St. Francois County detention center.
"Yeah, Scotty is well known," said Deputy Sheriff Dennis Smith, reviewing Masters' criminal history.
Masters, who lives in the nearby town of Park Hills, has been arrested more than a dozen times: for being drunk, for shoplifting, for missed court dates, for marijuana possession. He spent most of the 1990s and a stretch from 2000 to 2004 in state prison for the felonies of torching a car to collect insurance and possessing methamphetamine ingredients. In a jailhouse interview last week, Masters admitted he had taken the doughnut. Masters said he had been taking a break from his roofing job when he stopped into Country Mart. He was hungry. He fled the scene, but he said he did not lay a hand on the woman.
"Strong-arm robbery? Over a doughnut? That's impossible," Masters said, exasperated. "I've never had a violent crime in my life. And there's no way I would've pushed a woman over a doughnut."
After his arrest, he forgot all about the case. He assumed it had been dismissed. He spent the summer in jail on outstanding warrants. Just before he was to get out, he was indicted Sept. 14 in the doughnut case. His bail was set at $25,000 — well beyond his means. Masters briefly appeared in court Friday. His case was continued until next month. He is shaken by the possibility of a third felony conviction. A prosecutor could pursue an enhanced sentence. As a persistent offender, Masters could face a murderer's term.
"I can't believe this crap," Masters said.
A grand jury agreed with police on the strong-arm robbery charge. County Prosecutor Wendy Wexler Horn said that it was "way too early to know how it is going to play out" but that the charge seemed appropriate given the allegations. She was aware that some people seemed shocked by the case.
"People are missing the point," Horn said. "It is not about the doughnut."
But to many people here, it is all about the doughnut.
Still, for all the attention paid to the doughnut incident, one detail may never emerge: the kind of doughnut Masters stole.Country Mart stocks everything from simple glazed ring doughnuts to gooey butter squares to filled cream horns and danishes. But the police report makes no mention of the doughnut style. Gibbs said she could not recall it. Other workers, too, drew a blank. Even Masters, sitting in jail with only time to think, said he could not remember. It is a detail that seems lost to history.

And Masters never got a chance to enjoy that fateful doughnut. He said he threw it to the ground when he fled."
So, remember, if you ever commit a crime where a donut is involved, remember what kind it is, for God's sake eat it, and ....it's all about the donut!
Posted by Donut Man at 12:50 PM