The Friday Nut
It's been a very busy few weeks for this donut hunter. I'm working on a new Donut Directory logo with Julie Rosse Designs , a very talented local designer and one-stop resource for all your design needs.

I've been spreading donuts far and wide bringing smiles to my NY colleagues straight from Kanes Donuts in Saugus. Be sure to stop in and check out their remodeled store, and new seasonal flavors, Glazed Apple Cider, and Pumpkin- YUM! 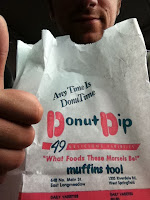 And last but no means least I've been receiving Shout Outs from Donut Hunters around New England; such as our Loyal follower Bob C., in Springfield Ma, at the ever popular Donut Dip. Bob did this to a Jelly; I don't blame him.

And then of course we have our representative from New Hampshire, continuing that series of shots "Where's Tony with a Donut." Well, as evidenced by the picture you might deduce he's in an orchard, and likely in the state of New Hampshire. In fact, you wouldn't even know that Tony took this picture if it wasn't for the presence of the Apple Cider donuts on the hood of his car. Notice the large bite out of the donut on top. I saw the massacre that followed; it wasn't pretty. But again, I don't blame him. They're delicious!
Since Fall is now in full swing, and the donuts flavors change with the seasons, please don't forget to keep sending along your pics, hot spots and favorite hidden donut gems. We love to feature you!
Posted by Donut Man at 12:36 PM