A Call to Canadian Donut Hunters....

The Tuesday Nut
Greetings Donut Hunters! I've been traveling the last few weeks but it's great to be back in the good ole' USA, though I do miss my time in the Maritimes. For those of you who weren't aware I just returned from the culmination of an epic side-car motorcycle trip with my 78 year old father, who rode the 2600 mile journey in the side-car the whole way. This story harkens back 3 years when my brother and I took the same trip and our father unsuspectingly said "If you had had a side-car I would've gone with you." To which I said "Ok." 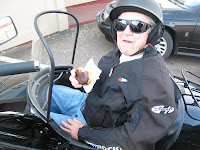 Traveling to a new country of course means locating and trying their donuts, which my father was only to happy to assist us with.
Now, as has become the case here in the States, the one saving grace for the donuts sampled was a small local bakery in Chéticamp. Otherwise the chain stores were not only a significant disappointment, but I can actually claim that I have found one of the worst donuts I have ever eaten. I threw out half of a Boston Creme it was that bad. I know, you're shocked, it's true. Hence the title of this Blog entry. Please Canadians, if you can direct us to your best I want to hear from you. The Donut is, after all, the unofficial national Canadian Food, but these examples don't show it. One aspect that I will add, in all fairness to our brothers and sisters from the Great White North, is that regionally and demographically food tastes and textures can differ depending on the pallet. For example, yeast raised donuts of this region have a more bread-like consistency than the large majority of those in the US. This consistent difference would lead me to believe that Canadians might actually prefer a more bread-like donut than the US does; this will take more research to determine. 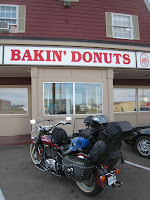 Stop 1) Bakin' Donuts; Summerside PEI. In all honesty and fairness to the subsequent shops we stopped at on the way through, I have previously been to this Bakin' Donuts, and other than just loving the name, wanted to confirm the limited number of varieties they offered; confirmed. Other than a few cake donuts and surprisingly a Boston Cream, they are largely a franchise which focuses on inexpensive, but well portioned breakfast and coffee. We sampled a Boston Cream, which you can see dad eating in the above photo and noted 3 things, 1) Bread like consistency of the dough 2) Sugary very light chocolate topping as opposed to an actual frosting 3) Cream that was very distinctly not homemade, almost clumpy. As we were there around 8:30 am, freshness was not really and issue. This donut would be passable in a pinch but otherwise stick to the breakfast and don't let the name mislead you. 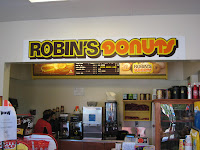 Stop 2) Robbins Donuts - one of the larger donut chains around Canada, behind Tim Horton's and Country Style; noted in Steve Penfolds book, The Donut: A Canadian History, has built over 130 locations across Canada since inception in 1975. We were fortunate enough to spot one such location in Cavendish while filling up just after leaving the Anne of Green Gables museum. The girl behind the country was extremely friendly and informed me that the normally have a black forest donut but that someone in the factory must have been asleep today as they had a Boston Cream/Black Forest hybrid delivered; sounded great to me! The dad and I bit headlong into this new concoction and were greeted by much the same texture and taste as that of Bakin' Donuts. They must be sharing the same recipe book or this is in fact a part of the larger Canadian regional pallet, or the same factory makes them. The Chocolate coating was just that, not thick and rich but sugary and thin, dough was bread-like and the filling clumpy...hmmm. 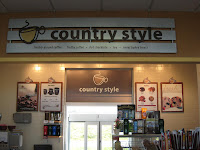 Stop 3) Country Style - I have heard the story of the Country Style chain for years and, being the Donut Hunter that I am, owe it to everyone to sample all manner of donuts first hand be they chain or independent. 2 things to note here, not only do I not remember where this location was (we were somewhere in the middle of Nova Scotia) and I don't want to, but I fear that Country Style has succumb to market competition in an effort to keep up with behemoths like Tim Horton's, sacrificing quality and moving more to coffee and quick serve than its donut roots. I bought a Boston Cream, in order to compare all samples evenly, walked out to share it with the dad, and can quite honestly say this was hands down the WORST donut I have ever had in my life. I took 3 bites just to confirm how bad it was and then threw it in the trash. I would've shed a tear if what I threw away was anything close to resembling a donut. The dough was bread-like, comparable to the others though more soggy and not as fresh (if this donut could've ever been fresh) and the chocolate coating had the thick consistency of wax with a hint of sweetness which resembled the smell of a candle factory going full tilt in the summer. If I had wanted to eat a candle I would have gone to a craft store, bought a box of votives and chowed down. This was gross to put it mildly. The dad tried to take a bite and spit it out. Consider yourself warned; Country Style should make Boston Cream Candles and label them that way; leave the donuts to someone else. 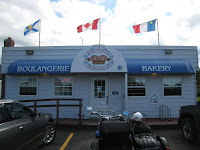 Stop 4) Aucoin Bakery, Chéticamp, NS- I almost passed this one by, save for having noticed the small donut on their sign. Thank god I didn't!! Leave it to the independent shops to pull through and Aucoin didn't disappoint. As seems the case with most of the donut shops and bakeries I have found in Canada, there is a greater emphasis on cake donuts than yeast raised. I figure, if you make a smaller variety and focus on cake, than what you do focus on should be excellent, right? Well, if I wasn't on a motorcycle this Donut Hunter would've walked out of Aucoin with all manner of fresh breads, pies, and tasty desserts; instead I walked out with a small sugared cake donut and a blueberry muffin for the dad. Dad was happy :) The donut was tasty, not dry, dunked very well with coffee and left no greasy taste in my mouth. Aucoin has been doing it right since 1959 and it's evident why. The smell in the shop is almost overwhelming while waiting in line, it says one thing; FRESH! Though Cheticamp might be a bit of a hike, if your in the Maritimes and looking for donuts you must make the journey. Otherwise just stop at your local Zellers and buy some candles; it's more satisfying to use wax that to eat it. 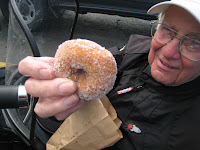