I have a friend named Whipple. Whipple lives in DC. Whenever I receive a random email from Whipple, laughter ensues; this was just such an event. Ever since I got Whip hooked on riding motorcycles he also managed to tune his sensibilities to the wonderful world that is donuts; I talk about them and need to stop for several whenever we are on a trip, so it just happens.


This random email happened to have the subject heading: "DC's inaugural donut run..." I knew it was sure to be a winner.

I know what you're thinking, "What is a donut run?" "And if it is what I'm thinking, why would anyone do such a thing?" Well, why wouldn't you? These are donuts after all. I decided to do some more research into this pressing matter and have some astonishing news to report. A basic search will bring up everything from Episode 11 season 2 of the Veronica Mars show, to the Toronto Donut Ride, to the demise of Brown Universities Naked Donut Run; though reports have it that some enterprising students have found loop holes in the public decency laws so as to keep that one afloat- THANK GOD!!
It seems that, in almost every way possible, we have incorporated our favorite little spud nut into a clash of health, exertion, hilarity and indigestion by eating 12 and then running a 5K, the basic donut run model. The only thing I'm disappointed about is that Boston does not yet have a donut run..hmmm. Yes, we have runners using donuts as pre-race fuel for the Boston Marathon, but we need an event for real people, people who don't care if they make it to the finish, love to eat themselves silly and purge only to do it again, people who would eat  a dozen donuts and then do the farthest thing from sanity possible- RUN! Sounds like just the kind of event Boston needs; more to come. 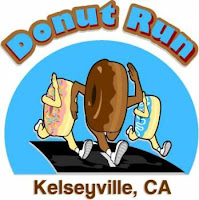