Philosophy of the Doughnut

My dear friend Sally Levitt Steinberg's grandfather Adolf Levitt, who invented the automatic donut machine, had the Optimists Creed displayed on all menus of his Mayflower Donut chain: 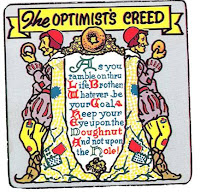 "As you ramble through life Brother, whatever be your goal, keep your eye upon the donut and not upon the hole"

For today's nut I would like to offer you up several bits of donut wisdom which, like the Optimists Creed, speaks not only to how we should try to face life each day, but even better how we can use donuts to face life and bring out our own inner donut. Think of this as "Donut Chi" if you will and thank God, or whatever you believe in, that we figure out the grand mystery of mating sugar, dough, and deliciousness.


Quotes: From the Mel -O-Creme site

"The donut hole didn't go anywhere because it was never really there." - - ...Rhonda Barger

"Doughnut or donut? That is the question!" anonymous

"The (doughnut) hole is there, we know it is, but you can't see it, you can't feel it. You cannot prove its existence, and yet by its very existence it defines and shapes the doughnut. Therefore, I believe the hole is the soul of a doughnut. When you eat a doughnut, you have fulfilled its reason for existing, and you set free its immortal soul --the hole. Woe to those half-eaten doughnuts whose souls are doomed to purgatory, and those stale, unbitten doughnuts whose immortal lives will continue in doughnut hell!" ...Teddi Deppner

In regards to what kind of donut you are, well:

Religion
Church of England : You know, in a very real sense, God is a doughnut.
Buddhism : God is a doughnut, and God is not a doughnut.
Confucianism : Confucius he say doughnut.
Zen : What is the sound of one doughnut clapping?
Catholicism : The priest blesses the doughnut and you mustn't chew it.
Christianity : I was hungry, and ye gave me a doughnut.
Fundamentalism : Doughnuts are an abomination unto the Lord, etc.

No matter what type of donut or doughnut you are, and how you see the world through your nut, just remember it's the donuts that bind all together; in laughter, in sadness, in joy and indigestion.
Posted by Donut Man at 12:39 PM