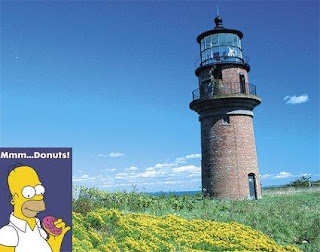 I love my daily Metro on the morning train ride into work...of course, I love it more when it's coupled with a donut. What's even one step better is when the paper squeezes in a story about a donut.

Who knew a summer travel story could so overtake me with glee that I couldn't help share with my donut loving cohorts? Granted having grown up on Cape Cod any respectable donut fanatic would excommunicate me for not having known about this sooner (I've only actually been to the Vineyard twice..shhh) but having been knee deep in academics in NH when the shop opened in 2001 I think a pardon is in order.

The Martha's Vineyard Gourmet Café & Bakery opened in April 2001. And its menu boasts everything from fruit square to wedding cake to fritters and of course- DONUTS! They boast 2 locations, Oak Bluffs and. But only the Oak Bluffs site, which has been been a bakery for as long as most Vineyarders can remember, sells donuts. The trick at MV Gourmet is to get to the back door at night , 9PM-12.30AM, boasts sign, for some fresh hot, melt in your mouth morsels. Benjamin Hart, Metro contributor went so much as to say..."Its specialty is the apple fritter, a confection so addictive it should be illegal."

Fortunately its not! Expect a full first hand report when I visit MV Gourmet later this summer.
Posted by Donut Man at 4:36 PM